What is drama without conflict? Usually, it is “love” that must wrestle with villainy, duplicity, rivalry, honour, or duty but religious or political persecution also engenders extensive emotional strife.

Opera’s nefarious no-gooders (usually basses) are nigh on numberless, beginning with the devil incarnate (Gounod’s Faust, Berlioz’s La damnation de Faust, Boito’s Mefistofele and Rubinstein’s The Demon). Then there are the lechers from the prurient Podestà (Rossini’s La gazza ladra) to that salacious sadist Scarpia (Puccini’s Tosca).

Female villains abound too, none more so than the vengeful Queen of the Night (Mozart’s Die Zauberflöte), the or the powermongering Lady Macbeth (Verdi).

Thankfully, opera’s angels seek to protect the vulnerable, literally flying to the rescue of Hänsel and Gretel alone in the dark, scary forest, or in form of loving fathers (Verdi’s Simon Boccanegra and Luisa Miller) or protectors such as a knight in shining armour (Wagner’s Lohengrin) and the saintly Elisabeth (Wagner’s Tannhäuser).

The plethora of poisons found in opera are a toxicologist’s treasure trove and although many fatal doses are self-administered for example – Suor Angelica (Puccini), Abigaille (Verdi’s Nabucco).

Join Ross on Thursday mornings for this five-part series of  high drama:

*Please note, dates may change – but will be updated here.

Then there are those moments of heart-stopping, lyrical beauty when the heroine or hero (and sometimes even the entire ensemble) begs for mercy, freedom, or divine intercession. The operatic prayer (or “orison”) was almost de rigeur in 19th century Italian opera but many fine examples also grace the French, German and Russian repertoire.

Curses can also drive the action, most notably Alberich’s curse in Wagner’s Ring cycle which brings about the demise of all who wear the ring (Fafner, Wotan, Siegfried & Brünnhilde). Similarly cursed, although with varying consequences, are Rigoletto, The Flying Dutchman, Leonora (La forza del destino), Parsifal, Salome and Butterfly.

Finally, there is the blessing, whether paternal (Simon Boccanegra, Fidelio, The Bartered Bride) or religious: Oronte’s baptism (I Lombardi alla prima crociata), the Pope’s pardoning of Tannhäuser’s sinful dalliance with Venus, the consecration of swords that are about to slaughter hundreds of Protestants (Les Huguenots) or Ethiopian blood (Aida), and Dosifey’s last rites to the Old Believers before they self-immolate (Khovanshchina).

Please contact the Avenue Club Office for more information or to book your place. 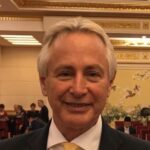 Ross Alley was, for many years, a music lecturer at Birkbeck College (University of London). He has also given numerous guest lectures for the Royal Opera House, English National Opera, Wigmore Hall, the Wagner Society, the Gustav Mahler Society, and NADFAS.