Alan’s history lectures have been very well received in the past – interesting and fun – so by popular demand, he is back with a new series. He will be starting online via Zoom but intends to come back at the Avenue Club in person when we can re-open.

Here’s an outline of the series with some of the topics he will cover:

London has been mapped, drawn, painted, engraved, photographed, dramatized, filmed, televised, fictionalized and sung and spoken about. It has been seen as hell and heaven, as maze and machine, as oppressor and liberator, as killer and reviver. For some, it is a place of oppressive crowds; for others, of existential loneliness. This course will follow film-makers and song-writers, cartoonists and cartographers, photographers and novelists as they explore and express our city.

Some topics to be covered:

These lectures are free but we welcome any donations to the Club. Please get in touch with the Avenue Club Office for details on how to join him on 020 8948 8807 or e-mail avenueclub@kewcommunitytrust.org.uk 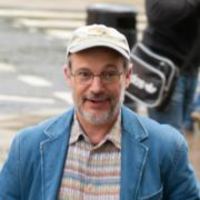 Alan is Professor of Humanities and Head of Liberal Arts at Hult International Business School. He is American by birth and nationality, but grew up largely in India and Pakistan, and has lived in the UK since 1977. He studied at Yale and the University of Toronto and obtained his PhD from the University of Cambridge. He is married to Linda Collister and has three very English children.

Alan has been teaching the history of London to undergraduates for almost 30 years. His chief research interests are in Victorian poetry and journalism, and the cultural history of London. His teaching practice has always been to anchor the general in the particular, making as much use as possible of storytelling and field trips.